So, my last post was about my own struggle with body positivity and how I have started trying to deal with it. I think the next step is to talk about being sex positive. To do so, we will have to look at several topics and even revisit some history. It is important to think about because I feel the LGBTQ community often times goes down a dark avenue when it comes to sex. It is used as a means of bypassing connection for the physical feelings it provides. It’s time we take sex back and approach it from a health mentality. Before I go that far, I want to dive into some view on fetishes and how we used to identify one another. So, my dearies, set down, pour yourself a glass of your favorite beverage, and let’s talk.

First stop into fetishism is the Hanky Code or flagging. Now some of you might be thinking “what the heck is he on about,” well Mary, the hanky code was used as a means to identify homosexuals and the sexual proclivities at a quick glance. See a hot guy walking passed in a pair of tight wranglers and you happen to notice that he has a light blue handkerchief hanging out of his left back pocket you would be able to quickly ascertain that he preferred to receive oral sex from his partner. If you happened to be someone who preferred to give oral sex, you knew you already had an in. Neat huh?

No one really knows where or how the hanky code started, some say that it originated in San Francisco shortly after the gold rush era. It was a time when women were in short supply so during square dances one man would wear a blue bandana as a signifier that he would be the male or lead during the dance. Then there would be a man wearing a red bandana that would be the female or follower in the dance. They would be worn around their arms, hanging from their belts, or in the back pockets. It is also believed that the modern version of the hanky code started in New York around 1970 or 1971, a journalist of The Village Voice joked that instead of wearing keys to signify someone was a “top” or a “bottom” that they should just use different colored hankies. Others say it started in San Francisco at adult stores. However, Alan Selby, owner of Leather ‘N’ Things in San Francisco, claims he wrote the first hanky code. Selby says, “their bandana supplier inadvertently doubled their order and the expanded code would help them sell the extra colors they had received.” So, he created the first hanky code, printed them onto cards, and gave out with each purchase.

From the first cards printed, color meanings have expanded to include just about every color or style of cloth imaginable, Where you wear the hanky is as important as the color, Typically, any hanky worn in the left back pocket indicated you were the “top” or the “aggressive”, whereas the right pocket meant you were the “bottom” or the “passive.” Think giver and receiver, if the terms still leave you a bit left out. The hanky code was very popular for the BDSM community but as it relates to fetishism, it was found in all aspects of our community. For example, a lavender hanky meant you were either a drag queen or into drag queens. There is not one definitive list and it has changed a lot since its first appearance. What we do know is with the advent of the internet, the hanky code has grown and expanded because people have become much easier about discussing their fetishes with others of like minds, online. It has also progressed to include accessories to show the same meanings, like harnesses or singlets. 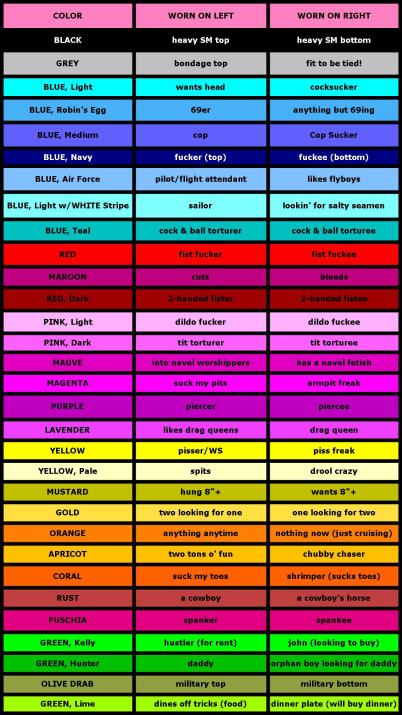 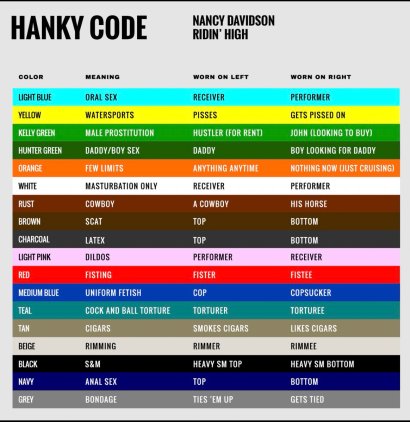 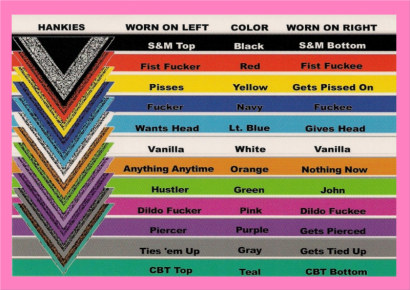 According to Leatherpedia.org  the hanky code is a perfect example of the theory called Symbolic Interaction. It is defined as “Symbolic Interaction is defined by applying meaning and value to people, places or things. It is a counterpart of instincts where we are born knowing certain information. SI is learned through experiences.” It basically means we put meaning to specific things to give it a value for us. It is not limited to only the hanky code but can be seen in religious iconography or even brand specific merchandising.

I am sure you are wondering how in the fuck do I know so much about this topic, do I use it, or am I just a weird freak. Well that would need a little history lesson to explain some of it. When I came out and started going to the bar near my hometown, I was unbelievably naive. If you asked me about leather culture and gay men, my knowledge would have been limited to what I had seen in Police Academy when they always seemed to end up in the Blue Oyster Bar, so needless to say it was lacking. The bar I visited was called The Park and the last Saturday of every month used to be Trade Night or Leather Night. It was when the BDSM group would come out with their boys on leashed dressed in leather chaps, harnesses, and jockstraps. You would see hankies tucked into their waistbands or belts of a wide variety of colors and often more than just one. As arousing and provocative as it was, I had no clue to the meaning, other than it was fueling my lustful desires. Thankfully, after I started dating, I had someone I might be able to ask what the hell was I seeing. I was embarrassed when I asked, but I had to know. My boyfriend at the time did have a bit of knowledge about it, due to some of his particular fetishes, so he schooled me and then promptly took me to the gay bookstore the very next day. Forever more my world was changed. As for being a practitioner, the answer is no I do not participate in the hanky code. That being said, I should probably wear an orange hanky in my back-right pocket since it indicates “not now, just cruising.” 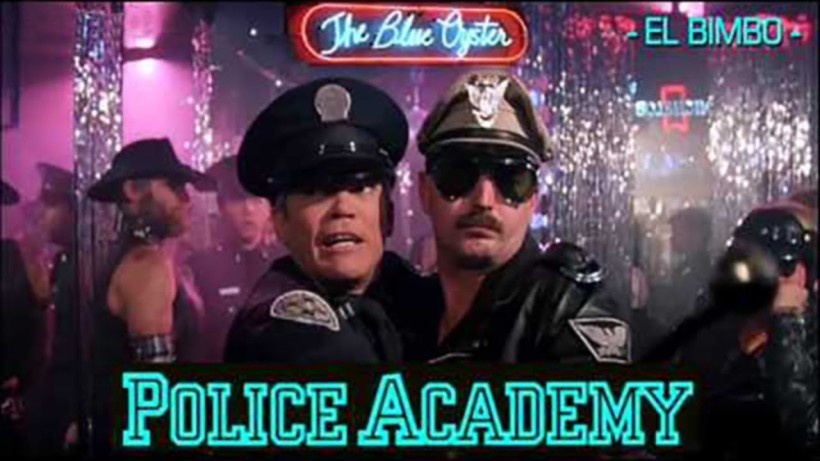 Take a look at the code and see what trips your fancy. If you want to put it into practice, grab the hanky of your predilection and head on down to the Leather Stallion on a Saturday night. Just be ready for what may happen if you are advertising. At the end of it all, it is about fun but always be safe. Make sure you tell your partner you are just testing the waters and not ready to jump double fisted into the deep end. And always, play safe.