It seems appropriate that, while discussing our Transgender community, we discuss the rights that LGBTQ have or do not have here in Cleveland. It is important to understand them in context to where we are and what we should be thinking about for the future. The current administration has shown us that they do not care for the LGBTQ community and are taking steps to reverse the progress we have made. Let me be clear in saying that we have made progress, but our fight is far from over. 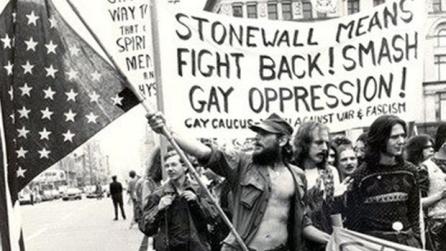 Ohio adopted its first sodomy law in 1885 in and four years changed it to include fellatio. This wasn’t removed from state law until 1972. Ohio was one of a few states that were already repealing their sodomy laws, however it was still considered a misdemeanor to express interest from one man to another. In 1979 the importuning law, expressing of interest romantic or sexual nature, as a misdemeanor was changed to read as an unwelcome or unsolicited interest by the Ohio Supreme Court based on the case State vs. Phipps. This wasn’t overturned until 2002 when the courts reported that the First and Fourteenth Amendments did not allow for discrimination based on sexual orientation in these cases. It wasn’t until June of 2003 that the United States Supreme Court ruled to remove all remaining sodomy laws from the states. These statutes were used to specifically target LGBTQ people.

Same sex marriage wasn’t passed until June 26, 2015 from the ruling of Obergefell v. Hodges. Adoption and parenting for same sex couples is legal in the state of Ohio. In 1987, Ohio enacted In re Ladrach, which made it illegal for someone undergoing gender confirmation surgery to be able to change the gender on their birth certificate. Though it is perfectly legal for Transgender people to amend their driver’s license to reflect their gender identity. It wasn’t until March of this year (2018) that four Transgender Ohioans filed a suit against Ohio Department of Health to revoke In re Ladrach and to have their birth certificates re-issued with their correct gender. At the time of this filing, Ohio was one of three states that Transgender people were banned from amending their birth certificates.

Conversions therapy suggests that it is possible to change the sexuality or gender identity of someone by using spiritual or psychology interventions. These are measures that took the place of things like institutionalization or castration to prevent homosexuality. They stem from a period in our no so distant history where it was believed that to be a LGBTQ was a mental illness that could be treated. Today they include things like electroconvulsive shock therapy. The Mormons use a version of this that combine audio/visual stimulation in conjunction with electroconvulsive shock therapy. There are electrodes connected to parts of your brain that monitor your reaction to the visual and audio cues they provide you. Essentially, if they show a young boy images of gay sex, two men kissing, of various other things that can trigger a response from someone who is gay, they are given large amounts of electric current. The mindset is that given enough of this kind of “treatment” your orientation would start to change. These types of interventions are nothing short of torture and are not quantifiable by any medical standard. None of these studies have shown to “cure” anyone of being LGBTQ. These therapies do more damage than help, causing feelings of shame, guilt, and anxiety, which only creates larger issues needing more help. Suicide rates amongst LGBTQ or question youth is already horrible numbers to consider. LGBTQ and questioning youth are five times more likely to have attempted suicide than their heterosexual counterparts. 40% of Transgender adults have reported attempting suicide, of those 92% have attempted suicide before they turned 25. Numbers are often hard to quantify in these studies since more often than not, they are misreported or not known.

We cannot become complacent in our fight for our rights. We definitely should show support to Cleveland for what it offers, but at the same time we need to challenge for better situations. Ohio was home to one of the first cities (Toledo) to pass a ban on conversion therapy, we should push to be the first state to completely ban it. In December 2015, MTV.com reported that 77% of the LGBTQ population live in states where it is legal to conduct conversion therapy. We must #uniteandfight, let our voices be heard that we will not stand by and watch our community still be treated this way. We must get out there and vote every election to ensure people who support us are representing us and the changes we want made for out country. Make your voice matter and show them our votes do count. #votethemout