There is always a lot of information about helping LGBTQ youth; providing counseling, support structures, education, and awareness. That is important, as these are people that fall through the cracks, but the flip of that spectrum is as equally important. Our LGBTQ elders also need the very same support systems and the infrastructure isn’t there to support the needs associated with them and often times there isn’t the community support for them either. Who will be there for those members of our community? Who will be there for you when you become part of the older LGBTQ people?

According to the American Psychological Association,  “LGBT older adults may disproportionately be affected by poverty and physical and mental health conditions due to a lifetime of unique stressors associated with being a minority, and may be more vulnerable to neglect and mistreatment in aging care facilities.” Social isolation becomes a larger factor of mental health issue due to LGBTQ adults being more likely to live alone, be single, and not have children, in relation to the heterosexual counterparts. Most current health care for older adults do not address the possibility of them being LGBTQ, out or not and doesn’t help that misconception by healthcare workers can compound feelings of not wanting to vocalize that they are LGBTQ. It is quickly being a priority for proactive healthcare reform to include training to be able to speak to all older people, whether they have or have not identified as a specific minority group. Groups like SAGE (Services & Advocacy for Gay, Lesbian, Bisexual and Transgender Elders) are working to help address these issues.

Founded in 1978 S.A.G.E (Services & Advocacy for GLBT Elders) is the oldest and largest organization advocating for the rights of senior LGBTQ people. SAGE was founded by activists to ensure that LGBTQ people could age with dignity and respect. They are a dedicated movement of loving, caring activists dedicated to providing advocacy, services, and support to older members of the LGBT community. Their mission states that our LGBTQ elder fought and are still fighting for their rights, so they will never stop fighting for theirs. For more information about S.A.G.E, you can visit them at their website SAGEUSA.org.

The LGBT Community Center of Greater Cleveland also feels that our seniors are an integral part of our community. In 2003, they created SAGE Cleveland, a program that meets three times a week with the mission of creating a safe and nurturing environment that promotes the ethnic, racial, and gender diversity. They are open to the community with a focus on LGBTQ who are 50 and older, and their programs focus on discussion groups, low impact exercises, and traveling to various activities and locations in Cleveland, to allow seniors to experience these events with a sense of community. You can find out more about SAGE and the LGBT Community Center of Greater Cleveland by clicking the link. 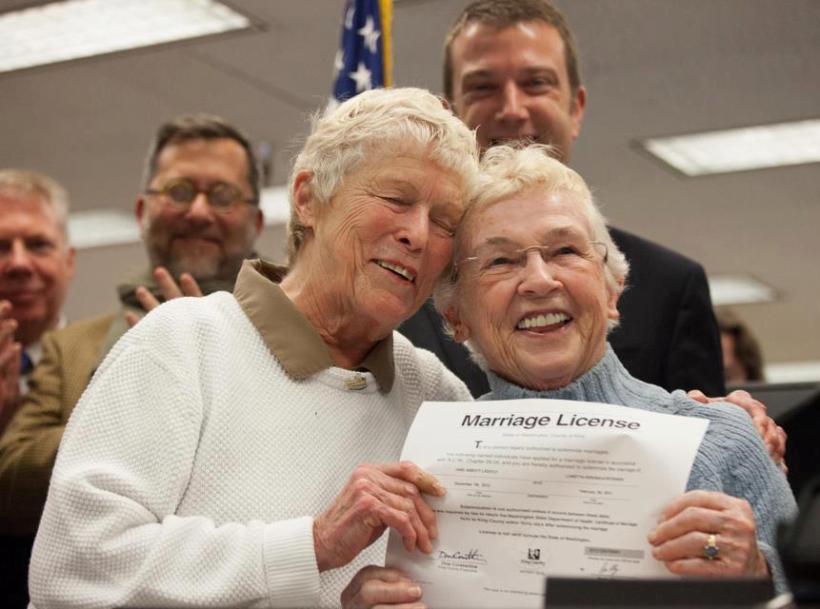 According to an article posted in the Plain Dealer, Northeast Ohio LGBTQ older adults suffer depressions, feelings of loneliness, and often times do not share their orientation with their doctors out of fear of being treated poorly. The LGBT Community Center of Greater Cleveland did the survey mentioned in the article. 640 LGBT seniors responded with concerns on who would take care of them as they age and who would carry out their wishes once they became ill. Of those surveyed, 40% said they experienced some form of depression and 4% of them said they did so on a daily basis. Of those same people, 40% felt their doctors were inadequately aware or trained to handle needs of LGBTQ people. 45% of the lesbians over 65 polled are earning less that 20,000 a year, and entry level employee at fast food restaurants earn more, in comparison. 27% polled were earning less that 10,000 a year.

LGBTQ seniors who fear disclosing their sexual orientation to their doctors are at risk of missing out on necessary screenings for sexually transmitted diseases, receiving information about safe sex practices, and miss out on being directed to the proper social services and support in the community. And if they are that reticent to share their sexual orientation, then they are far less likely to share other health information. They would be less likely to bring their partners to the doctor visits which makes it hard for them to act as advocates on their behalf.  Many LGBTQ seniors have hidden their orientation or refused services out of fear of inadequate care.

Seniors are marginalized, as a whole, in our country, but equally so among our LGBTQ community. Many of these are activists who were there in the trenches fighting for the very rights we enjoy today. It is hard enough when the current administration is fighting to overturn legislations that would remove discrimination, but when an entire group doesn’t have the representation to even be at the table, they become more lost. We have to be the ones who fight to take care of our own, piggy backing off other legislation will always leave us underserved. Remember those that have come before us and lets work on leaving a legacy for those that are to come. Let us work on keeping out seniors an important part of our community and show them the same respect we demand from others.