For a long time there seems to have been a division between lesbians and gay men. There have even been times in which the split between us was very hostile. Some say it is due to lesbians being against males centered culture and due to their deep ties to the feminist movements. Some say it is because gay men lost their way in the Gay Rights Movement and focused only on their causes and how it affected them. Even others say it is due to always being lumped together in one category without appreciating the differences between the individual groups. The reasons are less important, what we cannot forget is that we wouldn’t have a lot of the rights we do now if it wasn’t for our sisters in arms. Lesbians have been some of the strongest fighters we have had in our movement. 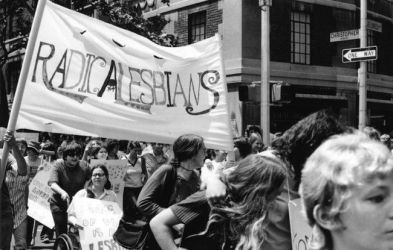 “What is a lesbian? A lesbian is the rage of all women condensed to the point of explosion. She is the woman who, often beginning at an extremely early age, acts in accordance with her inner compulsion to be a more complete and freer human being than her society – perhaps then, but certainly later – cares to allow her…” from The Woman-Identified Woman by the Radicalesbians 1970. Many of the roots of dissension between lesbians and gay men can be traced to the feminist movement and its push for women’s independence. About the time of Stonewall, lesbians had become very frustrated with the Second-Wave feminism and decided to make their own movement with Lesbian Feminism. Second-wave feminism focused on a wider range of issues: sexuality, family, the workplace, reproductive rights, de facto inequalities, and official legal inequalities. The separation from this form of feminist’s movement happened in May 1970 and the Radicalesbians were formed. The separation happened because the leaders of the feminist movements felt that lesbians were an obstacle to their goals and were labeled as the “Lavender Menace.”

May 1970, Rita Mae Brown and 20 lesbians created the Radicalesbians and took over the Congress to Unite Women, a conference about current women’s issues. They took to the stage, all wearing t-shirts that called themselves “Lavender Menace” and read to the crowd of 400 women their essay, The Woman-Identified Woman that laid out their precepts of their movement. This laid the groundwork for the movement to move forwards and gave rise to the Womyn culture, in which they worked to change phallocentric mindsets of how women should distinguish themselves from men. Before the beginnings of the Radicalesbians, the women’s movement were not accepting of lesbians. However, their fighting laid the groundwork for modern feminism movement saying that women have the right to define and express their own sexuality how they choose to. This is an oversimplification of what happened but gives the basis for the importance of this article. This organization and change based results are what led Harvey Milk appointed Anne Kronenberg as his political campaign manager. Kronenberg was an openly lesbian activist and her merits are what helped shaped the Gay Rights Movement and the beginnings of where we are today. During the beginnings of the Gay Rights Movement, the LGBT people were deeply entrenched on fighting together, but as the 70s progressed a rift started between the individual groups.

It wasn’t until 1987 that we really saw the community pulled together in a common fight again, AIDS was the new villain to beat. The 70s was an age of decadence for gay male culture, coming off the free love trains of the 60s. Moving into the 80s our sexual exploration was still going on when a new disease started killing people. It was mostly tied to the gay male population and when it hit the media it was Ronald Reagan that called it “GRID” Gay Related Immune Deficiency or more infamously called the Gay Cancer. As the CDC struggled to find the origins of this disease and how to combat it, tens of thousands of gay men were dying from this devastating disease. At this time there were many lesbian nurses who were the ones caring for us as we laid dying in our solitary beds, where our lovers were not able to be with us. They provided the care and needed companionship as we drew our last breaths. The group ACT UP! started during this same time and staged a demonstration in New York for greater access to experimental AIDS drugs. Marion Banzhaf and Alexis Danzig were veteran members of ACT UP who helped set up this demonstration. According to broadly.vine.com,”Banzhaf and Danzig’s contributions are among those which supported social and institutional change, from accelerated drug approval to the development of formal needle exchange programs, and saved millions of lives by hastening the advent of pro-tease inhibitors in 1996.” It was our lesbian sisters that proudly showed that it takes a village to raise a village. There were many lesbians that ran shuttle services for the first ever The Names Project, the Aids Quilt event in Washington D.C. This event was a living document to those we have lost because of AIDS. The first event had many who were still suffering from the devastation of this virus and lacked the means of easily getting around this event, so our lesbian sisters aided them by providing transportation and even pushing many of the sick around to the panels they wanted to visit.

We still see a separation in bars from gays and lesbians, often times we throw insults towards each other. But it never seems we really understand why, it’s like once we come out and start hanging out with our “assigned group” we follow the hive mindset and start disliking one another. I have seen this quote and heard it many times before, “it’s not that lesbians dislike penises, it that they dislike who they are attached too.” It all comes down to how sexuality is still viewed by the entire group. The same can be said for gay men and their derision of the female body. It is almost as if because we are either lesbians or gay men that we cannot appreciate the beauty of the human body outside our attraction to those like us. While we as gay men are not attracted to the female body, we should not view it with such contention that we treat them with revulsion and contempt. We should remember the times they were there to help us along in our struggles, after all, we are similar in that we all love members of our presenting gender.

We share in how the heterosexual community view us, mostly with disdain. Lesbians are often sexualized by heterosexual men. Pull out your smartphone and do a search on lesbians and you will probably see a heterosexual version of what lesbians should look like and sex from the same perspective. Nor are they any less apt to be told they are only homosexual because they haven’t had the right heterosexual partner. And let’s not forget that if a woman has short hair, dresses in pants and t-shirts, and doesn’t wear makeup that they are lesbians. Heterosexual men often fantasize about threesomes with two women having lesbian sex that he gets to join in on. Why? Because he has a penis and obviously, they cannot have real sex without one. Utter garbage, right? There are plenty of lesbians I am sure have had to deal with men asking them to perform for his amusement. TV shows, magazines, movies, songs, advertisements, and more use an over sexualized view of lesbians for financial gain. In more instances it is to drive a masculine reaction for financial purposes. What to increase the ratings of a TV show near the end of a season, show a lesbian kiss. Advertising uses perceived vision to increase interactions. Take the ad above, in it you see that the women are looking out at the viewer instead of themselves, this gives the perception that they are inviting the viewer in to be a part of the scene. Whereas in a normal interaction, those women would be gazing at one another and interacting with them.

We are on a knife’s edge in history, a precipice of where we have fought for and gained many things. All it will take is a misstep and we can have them taken away from us. It is time we put behind us the childishness differences that separate us and unite completely. We need the courage and strength that lesbians have shown in the movement. After all, each of us are still minorities and our fight is imperative to how we will live in the future. 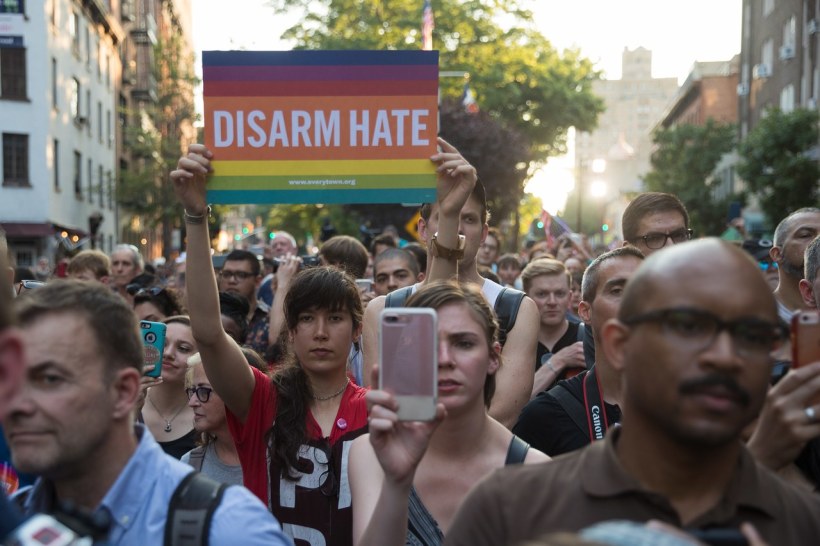