The holiday season is upon us and for me one of my more favorites of them is Thanksgiving. That being said, in a moment we will also discuss why I very much dislike this holiday. This is the one holiday where friends and family come together to share a meal. A time to take stock of what has transpired and what is to come. It is an invented holiday, but one that has some pretty awesome food to eat. So, bear with me while I share a bit with you.

As I mentioned, this is my favorite holiday and it is primarily due to the sharing of good food. Sitting down with those that are important in your life and partaking of food is an amazing experience. It gives you time to share your lives, appreciate the finer nuances of life, and slow down to appreciate the small details of a thing. One can argue about Christmas and the veritable boundless days of feasting, but it is also caught up too much in commercialism. Children are even taught to appreciate receiving gifts more than enjoying the closeness of the season. But that is not the point of this article.

Thanksgiving was always a “family” holiday in my family. We would go to the various grandparents’ houses where each person usually brought some side dish or dessert with them.  It was a time to go to my Meemaw’s house and it was looked forward too because we knew the food was going to be amazing. And we would get to watch the parades on TV. Meemaw or her sister Recie would cook the turkey till it was just dripping with juices and surrounding it was their version of dressing. Never did they stuff the bird. The dressing was savory with bits of raisins and apples to give it just a touch of sweetness. She was also famous for her corn pudding. I still have her recipe, but never have I been able to make the consistency or taste she could whip up.

Recie was famous for her biscuits. She did small batches at a time and always cooked them in pie tins. Their kitchen had a woodstove that she always seemed to precisely know the temperature of. They would come out of the over, perfectly golden brown and seven at a time. Piping hot with a pat of butter and a slice of tomato and it was utter perfection. For anyone from European countries reading this and wondering why we made biscuits in pie tins, an American biscuit is more akin to a scone. However, we make them savory as opposed to sweet. Recie was also known, at least for me, for her green beans. Whether it be Blue Lakes, Half Runners, or snap beans they were also delicious. They would cook for hours with fatback, which gave them the perfect flavor. Sunday dinners and holidays, I always knew I could count on green beans and biscuits.

My mother always made amazing sweet potato casserole, if you ask me, no one can cook sweet potatoes like southern cooks. My mother was the baker for holidays. Friends and family alike sought the confections she could put together out. There were a few she made during the holidays that I always waited for and I think my all time favorite was her Applesauce cake. When I went to college, it wasn’t often that I could afford to come home for Thanksgiving and my mother made it a little better with that holiday care package that had an Applesauce cake in it. This thing can literally last weeks. Every bite would transport me to my youth sitting around Meemaw’s kitchen table, eating dinner with the family.

Each of those women is responsible for me being able to cook today and I try to honor their memory by cooking dishes they did. Sometimes I am close and a great many others, I am simply left remembering amazing memories from my youth. Now that I live in the Cleveland area, I try to at least make one of the many dishes for my friends. More often than not it is the dressing and corn pudding. I have to admit, they are probably the hardest to pass up this time of year and sharing my family with them is pretty awesome, as well.

Thanksgiving is a created holiday, like I said. The actual idea and name came much later than the story that we were told in elementary school. We all remember it, how the cultured Pilgrims who came here to escape religious persecution invited the native savages to break bread in an act of friendship and solidarity and beginning of peaceful coexistence. Well just about all of it is a sham. First off, there was no last peace, as you can remember from history class. But specifically to that “famed” day, what he is taught is pretty different in every way from the truth. Pilgrims, themselves, were already outcasts. They wanted to overthrow the English government so they could practice their own beliefs. They left and came to this land as they outcasts they because and still thinking they were the “chosen ones.” This land was to be there “Holy Kingdom.” They waged war against anyone who didn’t agree with their purification interpretation of scripture. Even not opposed to using tactics like torture, war, and lies to achieve that end. They saw the native people as their divine right to make in their image.

The Wampanoag were not the friendly tree hugging people that our history books make them out to be. They spent most of their time fighting for their lands and lives against the League of the Delaware or what would later be called the Iroquois Confederacy. They also had many meetings with white fisherman and slavers. Our “Indian hero” of the story, Squanto, had a very real love with a British explorer John Weymouth and he considered him a father. This all happened several years before the Pilgrims landed. Squanto was also the only educated and baptized Christians and as such, the Pilgrims saw him as a divine instrument they could use in converting the rest of his people.

At this point the native people held a much stronger advantage in the situation. They were familiar with the territory, knew how to plant crops that would grow in the soils there, where to hunt, and were much more stronger force than the few Pilgrims. In hopes of holding out for the greater force arriving in the next year, the Pilgrims tried to forge a peace with the Wampanoag. They called for a meeting with the motive of securing lands for the Pilgrim Plantation, under the guise of peace. The Wampanoag were people believed to never turn away people who asked for help with an outstretched hand probably brought most of the actual feast for this meeting.

It was probably almost a generation later when the balance of power shifted and the King Philip’s War started and the very children of that feast were sat upon killing one another. This war decimated most of the New England natives and left them dead, refugees to Canada, or sold into slavery in the Carolinas. At this time the Puritans/Pilgrims had become fairly successful in the slave trade of native people. Not the peace loving, seeking our place to worship without fear of persecution types we were lead to believe in our school education.

There my kiddies, is a brief explanation of why I both love and dislike this holiday. What I hold onto is the sharing with family, a time to remember all past events that have gotten us to where we are now and be thankful for them. A time to look ahead and share in the very earthly delights of food and spirits. It’s the focus of small things that truly make living an ultimate experience. So slow down this holiday and eat, drink, and be merry. Enjoy the company and how it pairs with the amazing food you are eating. 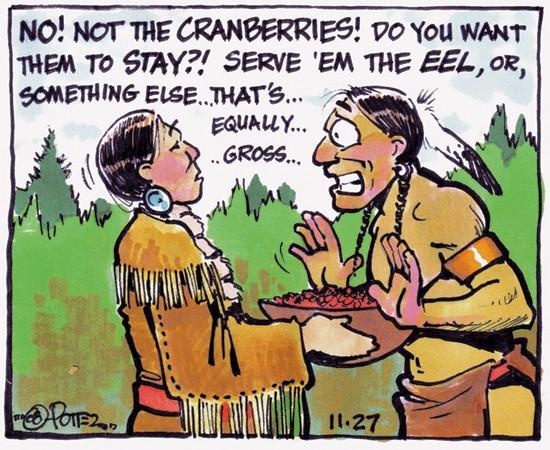