I’m a bit of a YouTube addict.  Recently, I saw a coming-out video from a popular vlogger that rubbed me the wrong way.  The vlogger criticized his viewers who had asked about his orientation.  According to him, asking “are you gay” constituted a personal attack.  He said that his orientation was nobody’s business, but then acknowledged that he freely shared and discussed other aspects of his personal life.

After watching the video, I read quite a few comments which ranged from supportive to ridiculous.  One YouTuber posted, “Whenever a woman asks if I’m gay, I ask if she has had an abortion.”  That comment pushed me to think about why we are so hostile towards the idea of discussing orientation.

There are several well-worn retorts to “are you gay?” and similar questions.  The most common ones include “Why are you asking,” “Why do you need to know,” and “That’s my personal business.”

During casual conversation, people often ask me if I have a wife or children.  Others notice that I don’t wear a wedding ring and therefore ask if I have a girlfriend.  In both cases, there is no practical reason for them to be asking.  In other words, they aren’t looking for a double date, nor do they want to invite my non-existent children to their kid’s birthday party.  They don’t “need to know.”  Rather, they are asking personal questions because they want to get to know me personally.  Similarly, learning my orientation is part of getting to know me.

Incidentally, the ubiquitous “wife or girlfriend” question has heteronormativity baked into it.  This begs the question, why are we okay with people assuming that we’re straight, but not okay with them taking the time to ask about our orientation?  If (under the circumstances) it would be appropriate to ask if I’m in a relationship, then it’s also appropriate to ask about my orientation.

So, is someone’s orientation a personal matter?  Yes.  Is it appropriate to ask about personal matters?  It depends on the topic and the circumstances.  For example, it wouldn’t be appropriate to ask about someone’s relationship status or orientation during a business meeting.  I’m not advocating for a world in which strangers or colleagues ask about people’s orientation willy-nilly.  However, in many forms of casual conversation, personal questions are well within our social norms.

For contrast, let’s consider a very different question.  We’d all agree that casually asking a gay couple which one the top is is completely inappropriate.  That would be roughly equivalent to asking a straight man which sexual position his wife prefers.  This, however, is not the same as asking someone about their orientation.  The key difference between these questions is that orientation is not inherently sexual. Treating the subject as a taboo sends two troubling messages:

2) Being queer is shameful

Twenty years ago, the community was more gun-shy because sharing one’s orientation would often be followed by judgment or ridicule.  Today, we shouldn’t assume that these inquiries are coming from a negative place.  By making the question a taboo, we only succeed in silencing the people who respect our boundaries, i.e. the people who probably would have supported us.

Let’s send a message that our orientations are not taboo.  It’s time to let the “don’t ask don’t tell” mindset die. 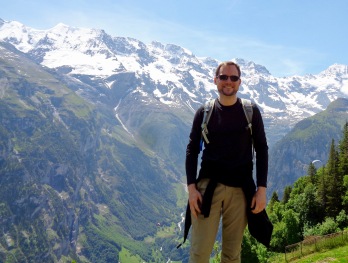 Karl Ericson is a “30-something” bisexual man who lives and works on the east side of Cleveland.  When he isn’t working long hours or sending snarky text messages to GayInTheCLE’s host blogger, he enjoys hiking, traveling, and vegetarian cooking. You can also find him in one of his favorite past times, dating the owner of GayintheCLE.com